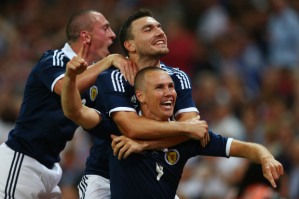 Scotland are finalizing their preparations to face Belgium tonight at Hampden in the World Cup qualifiers with little but pride to play for, with qualification now mathematically impossible. Belgium however will be looking to grab all three points as they attempt to secure their place at the finals in Brazil next summer. Currently sitting in first place in Group A, a revitalized Belgian side that features a host of big names like Chelsea’s Eden Hazard, Aston Villa’s Christian Benteke and new Manchester United signing Marouane Fellaini are unbeaten in their last six matches and are the in form team to beat in the group. Scotland boss Gordon Strachan knows that his side faces an uphill struggle to get anything out of the match, despite having home advantage. The manager is keeping his selection close to his chest but one player who will definitely not be playing is Kenny Miller, who announced his international retirement last month shortly after starring in Scotland’s 3-2 defeat at the hands of the auld enemy, England. Miller, who scored a stunning by goal in that game, has decided that it’s time to step aside and let someone else lead the line for Scotland.

One player looking to emulate Miller and take his place is Jordan Rhodes. The Blackburn striker is one of the most exciting prospects Scotland has unearthed in recent times and a potential genuine goal scorer as well. The 23 year old made a name for himself at Huddersfield where he hit an amazing 87 goals in 148 games, earning him a £8 million move to Blackburn and his first call up for Scotland. Having played 10 games already for his country (mostly coming on as a substitute) and scoring 3 goals, Rhodes is biting at the bit to become Scotland’s go to front man. With an impressive record in the Under 21’s (8 goals from 8 games) he is the fans choice as starting striker now that Miller has retired. He will face competition from three other players in his quest for the coveted Scotland No. 9 jersey in the form of Nottingham Forest’s Jamie Mackie, Sunderland’s Steven Fletcher and Wolves Leigh Griffiths although the latter has still to prove that he can handle the physicality of international football.

It will not be easy to step into Miller’s shoes however. The 33 year old retires after 69 games for his country, scoring 18 goals along the way, a majority of which were memorable.  Strikes against the Ukraine, Italy, Germany, England and Croatia helped Scotland to vital points in various qualifying campaigns but Miller will be remembered the most by the fans for his passion, work ethic and nonstop running. Never afraid to lead the line on his own, Miller would run for from the first whistle to the last and give his all for his country. A rare breed in Scotland as a player who played for both sides of the Old Firm (Rangers and Celtic) , its testament to the player that there was no animosity towards him from the fans, mostly because of his performances on the pitch for Scotland. Miller retires as one of Scotland’s greatest goalscorers, one behind legendary Scotland and Rangers striker Ally McCoist and the sixth most capped Scotland player of all time. Miller has returned to Vancouver to continue his club career with the MLS side but will be tuning in to watch Scotland take on Belgium today, hopeful that his replacement can get the goals needed to secure victory for the Scots. Scotland fans will be hoping for the same thing, and hoping that Miller’s decision to hang up the dark blue Jersey doesn’t come back to haunt them.