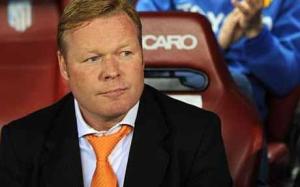 Ronald Koeman faces an uphill challenge from day one in his new job as Southampton manager. The Dutch legend, who signed a three year deal on Monday, must spend the summer trying to convince key members of his new squad to stay. Luke Shaw, Dejan Lovren, Adam Lallana, Jay Rodriguez and Calum Chambers have all been linked with moves away from the club following the departure of former coach Mauricio Pochettino last month to Tottenham. It now falls to Koeman to convince them not to follow their former coach out of the exit door and that he can fulfill their ambitions by growing the club into European contenders. Koeman, who will be assisted at the club by his brother Edwin and long time friend Jan Kluitenberg, will seek talks with the quintet as soon as possible in order to secure them for next season. 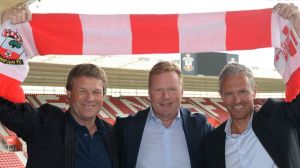 Koeman signs on at Southampton
(Image from PA)

However Croatian defender Dejan Lovren has already requested a formal transfer so persuading him to change his mind may be beyond Koemans’ powers. Adam Lallana has been heavily linked with Liverpool who raided Southampton earlier this summer for England striker Rickie Lambert. Lambert and Lallana are currently in Brazil as part of Roy Hodgson’s England World Cup team and will be talking about the prospect of linking up again at Anfield next season. Lamberts former striker partner Jay Rodriguez was also due to be in Brazil but injury ruled him out which strangely may work in Koeman’s favour. If he can get to Rodriguez early before he has recovered, he may be able to convince his that his future lies at St Mary’s rather than elsewhere. Koeman should also be able to talk Calum Chambers into staying another year, that is unless Arsene Wenger finally puts money behind his admiration for the player and places a bid for him. Arsenal have already lost Bacary Sagna to Manchester City so need a replacement right back before too long with Chambers one of several options under consideration by Wenger. Koeman will want to hold on to the talented right back who is destined to be a full England international within the next few years. The chances of him doing so are high given the players love of the club and strong sense of loyality. 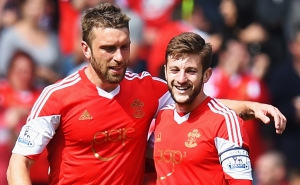 The same unfortunately cannot be said about left back Luke Shaw who will likely be leaving for a substantial fee this summer. After a stunning season last year, Shaw stock has risen considerably and is now seen as one of the brightest prospects in European football. With a sweet left foot and stunning pace, Shaw was picked ahead of Ashley Cole to be the support act for Leighton Baines in the England squad. Until recently Chelsea and Manchester United were fighting it out for his signature but it appears that Chelsea have now turned their attentions elsewhere clearing the path for Shaw to move to old Trafford. Koeman will not give up hope of retaining him and will use his fame as former PSV, Barcelona and Holland defender to persuade Shaw that he can learn a lot from Koeman by hanging around. 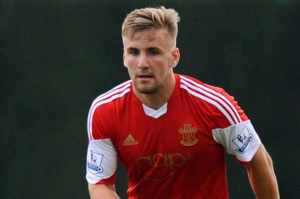 The other option to Koeman would be to cash in on all five players which would likely net Southampton somewhere in the region of £70-80million to then rebuild but the risks evolved plus the backlash from the fans makes this a last resort. Keeping all five would be the best scenario for Koeman and building his new team around them for his first assault on the Premiership. Success for Koeman is building upon the work that Pochettino started and helping Southampton to grow beyond that. Failure would likely start by letting all five players follow Pochettino out of the exit door.