A product of the Leeds United youth system, Sam Byram is one for the future. The 22 year old right back is well known to fans of the Football Manager franchise for being a steady performer and it would appear that once again fantasy is being replicated in reality. Having made 126 appearances for Leeds since his debut in 2012, he has established himself as an important member of the current Leeds team battling for promotion in the Championship. To the fans, he is widely seen as the future of the club along with a handful of other promising youngsters to have emerged in recent years including Alex Mowatt, Lewis Cook and Charlie Taylor. But his spell at Leeds United could be about to end and not by his own choice. 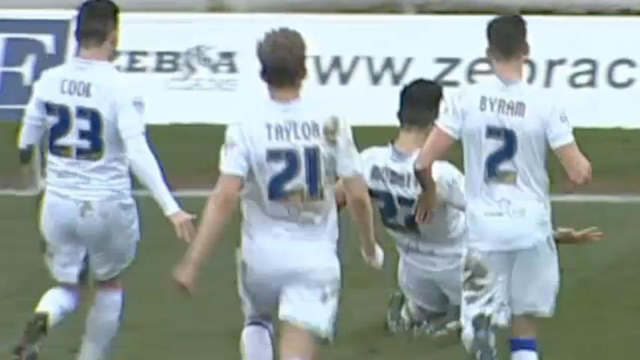 Cook, Taylor, Mowatt and Byram – The future of Leeds United (Image from PA)

With less than a year on his contract to go, Leeds approached Byram with an offer of an extension. However the offer made to extend for a further two years came with the stipulation that he would be paid less than his current £12,000-a-week salary. Unsurprisingly the 22 year old who is currently Leeds second longest serving player behind Charlie Taylor rejected the offer in a move that frustrated the Leeds board. Given the financial and off field issues that the club is going through, the offer was understandable but surely they did not expect one of their best players to accept a deal on lesser terms based purely on loyalty to the club? Most players put in Byram’s position would have done the same but now his refusal to sign an extension has painted him in a bad light with the clubs owner, the controversial Massimo Cellino who is now willing to let him leave in January rather than lose him on a free in the summer if he is unwilling to sign a new contract. Manager Steve Evans finds himself in a difficult position as he looks to try to retain Byram but he knows that the player’s agent is more likely to encourage his star to look for greener pastures after what they called an insulting initial contract offer. For Byram the whole episode has been disappointing as the England Under 20’s star was keen to sign an extension and stay with the club. But now he looks set to leave with several Premier League clubs watching in anticipation.

Front of the queue is Everton who have a good record of plucking players from the lower leagues and blending them into their side. Byram will look at how Everton have dealt with John Stones (who arrived from Barnsley), Brendan Galloway (from MK Dons) and Luke Garbutt (from Leeds) and how all three have been given their chance to impress. Under Roberto Martinez management and with the backing of owner Bill Kentwright, promoting youth players into the first team setup has been encouraged and is now a stable part of the Everton forward progression model. If he is to move to Everton, it could be as a direct replacement for Seamus Coleman who is attracting interest from Manchester United and Chelsea. Another club rumoured to be watching Byram closely is Newcastle. Steve McLaren is a fan of the young right back and his flexibility (he can also operate as a right midfielder or right winger) and wont rule out a move during the January transfer window. Gaining a first team spot however may be slightly trickier at St James Park given that the club already has Holland international Daryl Janmaat in the right back slot.  Finally there is Tottenham and the chance to work with Mauricio Pochettini. The Argentine is building an impressive young squad at Spurs and is a keen promoter of young English talent having let the likes of Harry Kane, Dele Alli and Ryan Mason flourish under his tutelage. His approach would be a welcomed one by Byram who can see the potential of working with the coach and the chance for him to make Byram into a full England international much like he did with the previously mentioned three.

For Leeds United fans, its another indication of how far they have fallen. The clubs inability to hold on to one of its brightest prospects must irk the Elland Road faithful and further dent their confidence in gaining promotion back to the Premier League. For Byram, it will be a bittersweet end to his stay at the club, one he has cherished since he signed on in 2010. But the right back has a bright future ahead of him that will no doubt lead him to becoming a full England international. Maybe at that point Cellino will regret not offering him more money in order to keep him at Leeds and give them a better chance of promotion.