Now that their historic season is over, it is time to look at what is next for AFC Ajax. After completing the domestic double, and their heartbreaking last-second loss in the semi-final of the Champions League, the whole world is once again talking about the Dutch giants. With this increased chatter comes change both on and off the pitch. Frenkie de Jong has already made a transfer to FC Barcelona for the staggering sum of €75 million, which could reach to €86 million if certain bonus targets are met. And he is not the only player that could be set to depart this summer. Centre back Matthijs de Ligt is being chased by top clubs from all over Europe, and the rumoured amounts with which they want to buy him reportedly over between €60-€80 million. In addition, Hakim Ziyech, David Neres, and Donny van de Beek are also very popular transfer targets with clubs preparing bids. So, it is safe to say that a lot of changes are on the way and the team could look very different next season.

Ajax however has been preparing for just that. They have already brought in four young players to fill in the possible gaps either next season or in the future. They have signed 23-year old Romanian central midfielder Razvan Marin from Belgian club Standard Liége, 18-year old Kik Pierie who is a Dutch-American defender from sc Heerenveen, 19-year old Dutch goalkeeper from FC Emmen Kjell Scherpen, and 21 year old Argentine defender Lisandro Martinez from Defensa y Justicia for a combined €24.5 million. They are also reportedly interested in PSV winger Steven Bergwijn and Martin Odegaard, currently out on loan at Vitesse from Real Madrid, among others.

Lisandro Martinez will join Ajax in the summer (Image from Tumblr)

Head coach Erik ten Hag has also been the topic of some rumours himself, but management is eager to extend his contract, which runs until 2020. His assistant Alfred Schreuder will depart however to fill in the vacant head coaching job at Hoffenheim in the German Bundesliga. It’s a huge blow to the team with multiple players already saying how sorry they are about that and that he is one of the most important people in the first team staff. Michael Reiziger, who together with Winston Bogarde is currently the head coach of Jong Ajax, will fill in Schreuder’s spot, and that means that more changes within the staff will have to be made. Clubs have also been eyeing up moves for director of football Marc Overmars and general manager Edwin van der Sar. Overmars has already confirmed that he is staying and feels like his mission isn’t done yet. Van der Sar has been linked heavily with his former club, Manchester United but as yet neither party has made moves to indicate that this will happen.

It is unrealistic to think Ajax will repeat their performances of the 18/19 season next year. For the first time since the 1990’s they reached the semi-finals of the biggest European club competition, while being seconds away from the final in Madrid. And whilst they are the richest team in the Netherlands, they can not compete with the type of money Europe’s elite teams earn. The amount of money they earned from this season’s Champions League campaign exceeded their yearly budget. And even though they won the Eredivisie title, their first one since 2014, that doesn’t mean they automatically qualify for next year’s group stage. For that to happen they will have to beat 2 opponents in the qualification rounds. People from within the club have therefore said that reaching the group stage is the goal for next season. But even if that didn’t happen and they would be playing in the Europa League, a deep run in this competition would also be a successful performance.

It is useful to mention that recently changes were announced in the Eredivisie. Some of them, that will be applicable to Ajax, are important to mention. This past season there was a lot of controversy about the fact that the KNVB (Dutch FA) rescheduled a lot of match weeks to accommodate Ajax in their journey. Now an agreement has been reached about this. This means that there will be more flexibility with the schedule, so they are actively working at giving Dutch clubs the best chance possible to improve performances in Europe.

Domestically the goal is and will always be to win the championship. The race between PSV and Ajax was tight, and for a long time it looked like PSV were even going to win the league with a lead of multiple points, but the gap to the rest of the teams in the Eredivisie was a ridiculous 18 points between Feyenoord in 3rd place and PSV, who of course finished 2nd just behind Ajax. This means that in the league they won’t have that much to worry about, as long as they keep their sights on PSV. Ajax won their first domestic double since 2002, and the squad should still be strong enough to repeat these accomplishments. They had the joint top scorer of the league in Dusan Tadic who is expected to stay, while André Onana and Nico Tagliafico have both committed to at least one more year in Amsterdam. If they succeed in keeping some of their other key players, and the new players coming in are able to adjust and are up to the required level, they will still have the strongest squad in the league. And the transfer market doesn’t close for a long time, so who knows what kind of surprises they can come up with to strengthen the team. 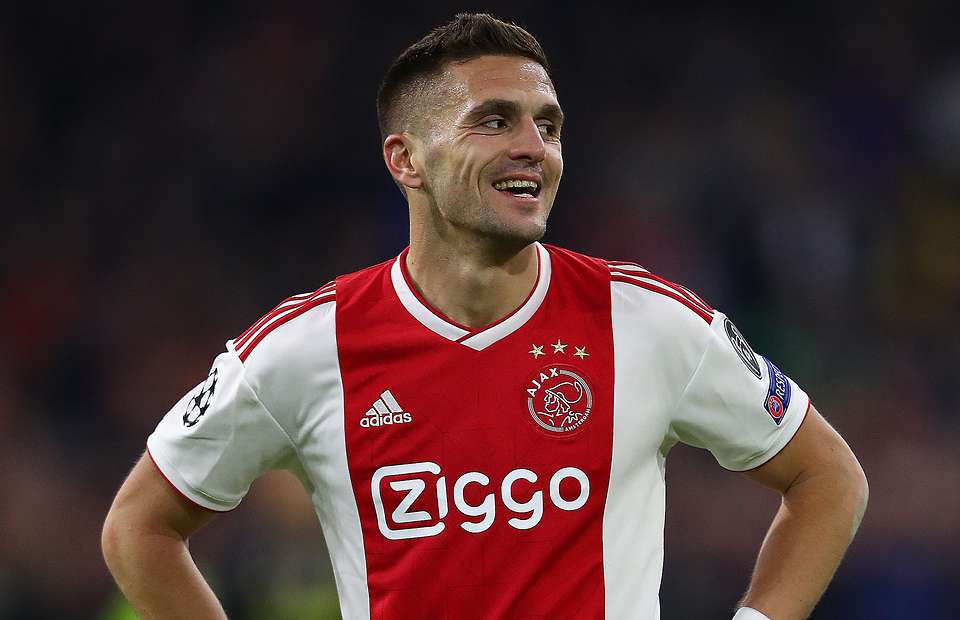 The KNVB Beker is often used by Ajax as a competition to test out formations and to give some bench players and youngsters more playing time. The focus is often not on winning the competition, but if they do get into the latter rounds the focus will be amped up and more of the main group will be playing to try to win it. Speaking of youngsters, it is well known that Ajax prides itself on their youth academy. And it is very possible that some of those youngsters will get called up to the first squad to fill up some of the gaps that will be left behind by outgoing transfers. Players like Jurgen Ekkelenkamp, Ryan Gravenberch (both midfielders, the former 19 years old, the latter 17 years old), Noa Lang (winger/offensive midfielder, 19 years old) and Lassina Traoré, an 18 year old striker who was brought over from partner club Ajax Cape town, have all made their first team debuts in the 2018/19 season, and other players have shown tremendous talent, and so they might get some opportunities as well next season.

Switching to tactics now, this season Ajax played in a 4-2-3-1 formation, but Ten Hag has already stated that that might chance next season, depending on what works best with the available players. This is a big chance in tradition for Ajax, as they are known for predominantly using the 4-3-3 formation, and then fitting in players to work within that formation. But this is also very exciting. Often Ajax – and Dutch teams in general – get accused of not having a ‘Plan B’ when things don’t go as planned, so this might be a good step in the right direction. It could possibly give Ajax some more weapons to drag matches over the line when they are facing tough opponents. Regardless of what happens this summer, next season is shaping up to be very interesting. There are some question marks here and there, but also a lot of opportunities on the horizon. Even though the season might not be as historic as this previous season, Ajax fans will still have a lot to be excited about.