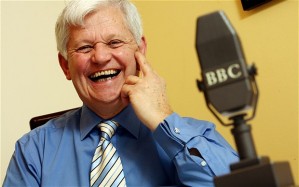 Before the start of last season we ran a story about the retirement of BBC Five’s much loved broadcaster James Alexander Gordon. Its with deepest sympathy that we report that James has died after a long battle with cancer. He was 78. At this time, we would like to remember James by re posting the original post from his retirement announcement as it was a fitting tribute to James and the legacy he has left behind. RIP James Alexander Gordon.

Excitement is building around the start of the new English Premiership season, with the return of Mourinho to Chelsea, a Chilean revolution happening at Manchester City and new management for the first time in 26 years at Manchester United. Saturday 17th August sees the kick-off of the new campaign and a return to formality except for one noticeable different. Viewers who listen to BBC Radio Five Live’s classified check will notice a new voice next season, following the retirement of the much loved broadcaster James Alexander Gordon. Gordon has been reading the classified results on BBC radio for close to forty years but is having to retire following the remove his larynx after being diagnosed with cancer surgery. 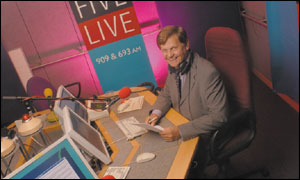 The Scottish born broadcaster is one of the most famous people in British sport, but few would recognise him as he walked down the street. That would be until they heard his unmistakable tones which would indicate that they were in fact talking to a broadcast legend. For nearly 40 years, football fans all across Britain tuned in to listen to the scores being read out by Gordon and were hooked on his every word. His voice was captivating and his style was very much unique to him, often using slight inflections to give the listeners subtle hints as to who had one the game just before he read them out. Gordon’s exact pronunciation of every team in the British leagues helped many a fan learn more about the beautiful game and the teams within it. It was as if Gordon was born to broadcast but it had never really been his plan, just something he stumbled into.

Gordon was born in Edinburgh in 1936 and unfortunately spent the early part of his childhood in hospital after contracting Polio. Later in life, his love of music drove him into the music business as a publisher before eventually transitioning across to the BBC as an announcer and newsreader in 1972, primarily for Radio 2. Only a year later and as Gordon described it “much by accident” he was handed the job of announcing the football scores on Radio Five Live, as a replacement for John Webster. Unsure what to do, Gordon brainstormed in a dimly lit room in BBC Television Centre about how he was going to do it. He test various methods from adding commentary such as “Manchester United were unimpressive today losing 2-0 to Arsenal” but felt he had no right to judge how the team had played, by looking solely at the score. That’s when he decided to use his musical training to add excitement to each team name and make it more interesting for the listener. Bosses at the BBC were initially hesitant but after listeners wrote to praise his first broadcast, a legend was born.

Gordon went on to read the scores for close to forty seasons, without ever missing a show. His performances were so exact and so brilliantly delivered that some believed that the scores were done automatically, with Gordon recording each team once and some magical computer pasting the pieces together to make the results. But they were all Gordon, each and every one. One of Gordon’s biggest fans was comedian Eric Morecambe who would tune in whenever possible to hear Gordon read out the scores. The two became friends but Morecambe never called Gordon by his first name, James instead he always greeted him by mimicking the tongue-twister score line which he has become synonymous with (despite it never happening) – ‘East Fife 4 Forfar 5’. At Morecambe’s funeral, his wife joked with Gordon that all Eric ever said about James was that he was desperate to hear Gordon say that score. Unfortunately he never got the chance before Morecambe passed away.

Gordon has spoken out publically since his decision to retire, unable to perform following the removal of his larynx:

“It’s with great sorrow that I have to give up the most exciting part of my career, the classified football results. They have been my life. I was terrified at first, but I put my heart and soul into it and have loved it ever since.”

Whoever is chosen to replace James Alexander Gordon as the voice of the football scores has a tough job ahead of them. But as long as they remember Gordon’s best piece of advice – the most important thing is making it exciting for the listener – the listeners will continue to get the football scores they want, in the style that is distinctly Gordon.

To watch Gordon at his best, click here: http://www.youtube.com/watch?v=PeJbah_JMOQ