With a place in the League One play off final at stake, Swindon Town entertained Sheffield United at the City Ground in the second league of their semi final clash. Swindon held a 2-1 advantage going into the match with manager Mark Cooper knowing that a draw would be enough for the Robins to confirm their place at the Wembley showcase. Sheffield United, who finished eight points behind Swindon in 5th place in the League knew that they would have to attack the game and score at least twice to win (there is no away goal rule in the playoffs). With the match balancing on a knife edge, the crowd made its way to their seats expecting a nervous clash between two evenly balanced sides. To their surprise what followed in the next ninety minutes was one of the most dramatic high scoring playoff matches of all time. As the referee blew his full time whistle, few could believe what they had just seen – a ten goal thriller that was high paced and full of action from the 1st minute to the last. 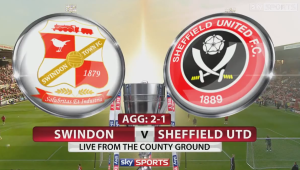 It was Swindon who came charging out of the blocks first using their five man midfield as a battering ram against Sheffield’s bewildered back line. The pressure paid off with Swindon taking the lead within four minutes. Some clever play down the right hand side resulted in Nathan Byrne whipping the ball into the box only for Craig Alcock to head it clear from inside his six yard box. Unfortunately for Alcock his header fell to the right boot of Ben Gladwin who rifled the ball into the net from 18 yards. The 22 year old midfielder, brought in two seasons ago from Hayes & Yeading in the Conference league has been in superb form this season and he added to his tally with his second goal of the game only six minutes later.  With Sheffield failing to clear their lines, Nathan Byrne capitalized by chasing down what looked to be a lost ball before crossing it across the face of the goal for the easiest tap in for Gladwin. Sheffield United were in disarray so when Swindon added a third on 18 minutes, the game looked all but over. Again it was that man Byrne on the right hand side causing the problems with another delightful cross into the box which the Sheffield defensive failed to clear properly once again. Picking up the loose ball, striker Michael Smith turned his marker before rifling his shot past Mark Howard in the United goal.

Nigel Cloughs side needed a miracle to turn this around. Now trailing 5-1 on aggregate, Sheffield needed a quick response if they were to stay in the game and they got it pretty much from the restart thanks to some good link up play down the right with two of the six Scottish players (Flynn and McNulty) in the Sheffield United starting lineup combining to set up the goal.  McNulty’s defense splitting pass was met by Jamie Murphy whose weak effort was bundled into the net thanks  to a deflection off Swindon defender Nathan Thompson. Sheffield were now on the attack and added a second just before the break with Robert Harris setting up Chris Basham to head home with a superb diving header. Both sides decide against making changes at the break but it would appear as though the half time team talks were the same; go out and kill this game off. The second half started with the same energy and drive as the first had ended. Sheffield with the bit between their teeth were pushing hard for an equalizer when the ball got turned over and caught them out of position. A long kick by Swindon goalkeeper Wesley Foderingham put Sheffield under extreme pressure with their defensive frailties showing again. First Smith was pulled over by Alcock as the pair chased the bouncing before Jermaine Hylton was bundled over in the box by Howard. Smith dusted himself off to covert the resulting penalty and put Swindon 4-2 ahead. Sheffield heads did not drop however and when left back Harris, who had been a constant threat with his crossing abilities picked up the ball and whipped in a beautifully curled cross towards substitute Steve Davies, there was only one outcome. His header gave Sheffield hope with 25 minutes left to play.

That hope however was eventually dashed as substitute Jonathan Obika sealed Swindon’s passage to the final with a delightful move. Breaking out of defence Swindon drove the ball up field with Australian Matt Luongo leading the charge. Sheffield, who had thrown everyone forward in hopes of getting the goals they needed were caught short once again at the back so when Luongo threaded a pass to Obika, the former Tottenham youth player only had Alcock and the keeper to beat. Bringing the ball back inside to beat Alcock, he coolly slotted past Howard sending the Swindon fans into hysteria. Sheffield needed three goals to send the game into extra time and they almost managed it, grabbing two late goals thanks to a Matt Done close range finish and a stunning solo effort by Che Adams but in the end they simply ran out of time. Swindon now travels to Wembley on the 24th May to face Preston N.E. with the winner earning a place in the Championship next season. For Sheffield it is another play off heartbreak making it their eighth successive playoff defeat and consigning them to yet another season in League One. However Nigel Clough’s men can be proud of the way that they rallied in the game after going behind and never gave up. That attitude and approach next season could end their Championship hiatus once and for all.